Sonic material : var. impacts on and inside a massive pane of bulletproof glass.

Forms of presentation / live-set vary depending on the given situation (Live AV, Installation). The piece premiered as AV-show at LUFF in Oktober 2017 and since then was shown at TransArt Festival (Bozen), Today’s Art (The Hague), Cafe OTO (London), IZLOG (Zagreb), Struma&Iodine (Vienna), Kesselhaus (Bamberg) amm. 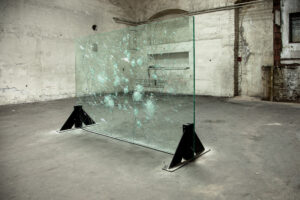 Central Soundsource of to the piece is a bulletproof glass pane measuring 3m x 2m with a weight of 400kg. This glass has undergone major physical impacts that forced   destructions inside the glass, but didn’t brake it entirely. For the fourth part of their DECOMPOSITION series the duo kutin | kindlinger recorded only waves, which were transmitted through the glass pane while being exposed to these forces. It’s a sample based work.

kutin | kindlinger employed special microphones (accelerators) originally designed as sensors for use in crash tests of cars. These tools, with superior capabilities in comparison to standard microphones, detected a myriad of unique textures within the infra- and the ultrasonic field, frequencies that reside beyond the range of the human aural perception. DECOMPOSITION IV is striclty based on these signals: sonic fragments that document a process of vast physical destruction. What we hear on the upcoming album is still music (the Variations), which has clear tangents with different genres, but sets its own unique mood and intonation. Not easy to handle and challenging at times, but rewarding and full of surprises in the end.
Metaphorically, kutin | kindlinger view the glass pane as a display. The titles on the album refer to our society, which is intrinsically linked to the screen and somehow lost in the labyrinth of information and dataism. DECOMPOSITION IV is a piece of broken music, that circles about the impossibility of safety while using destruction as the sound evoking trigger.

Released as double Vinyl (45rpm) and in digital formats via VENTIL-RECORDS.
A cinematic version has been released and has been screend at several film-festivals. 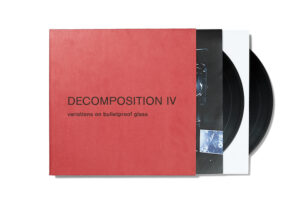